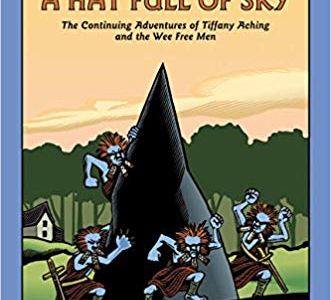 In the light of the terrifying conflict that seems to be once more looming in the horizon, I decided I would return to one of those series that reminds me we have the power to make our own good in the world. Since the new-year I’ve read The Wee Free Men and A Hat Full of Sky by Terry Pratchett.

I cannot stress enough how Tiffany Aching and Sir Terry’s absolutely lovely bildungsroman shaped the way I thought about the world. When they came out I was growing up with Tiffany.  Tiffany Aching was exactly what small, bookish, bullied, young-me needed. She had read the entire dictionary back to front and was a bit annoying with this information, but no one was cruel to her for it. She liked things to be correct. She read stories and thought things like:

“She couldn’t be the prince, and she’d never be a princess, and she didn’t want to be a woodcutter, so she’d be the witch and know things.”

I also wanted to know things. And from that moment I was hooked. These books were a cornerstone of my growing up. They feel particularly timely at the moment. They breathe hope back into my disenchantment with the world. These books really equip you in just a few short words with all the grit that you need to face down nightmares with nothing but a frying pan. 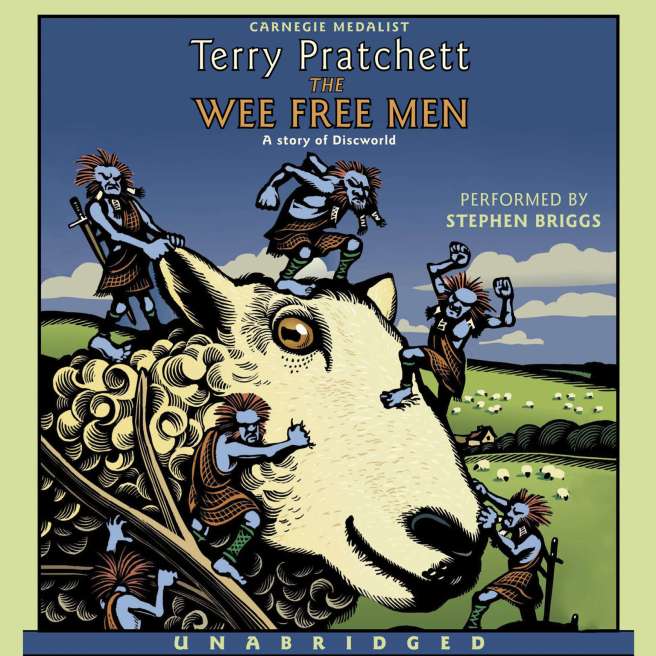 For those unfamiliar in the Wee Free Men, Tiffany at 9 years old discovers the Queen of the Fairies is trying to bring her court of nightmares into her home, the human world, the Chalk. After beating an evil water spirit in the head with a frying pan and staring down the headless horseman her little brother is stolen away by the queen, and with the help of the Wee Free Men, little blue pictsies, and a frog that was once a lawyer, Tiffany has to save him.

I think my biggest takeaway from the book today is that you can’t wait for someone else who will know how to do the job better. You have to do the best you can with what you’ve got, even if that’s just a frying pan and a book about diseases of the sheep.

You have a duty in the face of evil. In the words of Sir Terry:

“’All the monsters are coming back.’

‘There’s no one to stop them.’

There was silence for a moment.

The second thing I learned from this book, which has stuck with me all my life, is that humans are not intrinsically good or kind, in fact we are largely selfish. But we can choose not to let this tendency make us terrible people. There is tremendous power in intentionally deciding to be good and kind to those around us.

“All witches are selfish, the Queen had said.

But Tiffany’s Third Thoughts said: Then turn selfishness into a weapon! Make all things yours! Make other lives and dreams and hopes yours! Protect them! Save them! Bring them into the sheepfold! Walk the gale for them! Keep away the wolf! My dreams! My brother! My family! My land! My world! How dare you try to take these things, because they are mine!

I still weep reading these lines. The world today makes it so easy to curl up against the endless stream of terrible news and do nothing, to lean into cynicism and pettiness, but there is so much more power to be had in standing up against it, and choosing to do what’s right, even if it will only help in the smallest way.

On that thought let me leave you with this, where Tiffany tells Miss Tick about an old woman who was burned out of her home because the people thought she was a witch.

“I bet Mrs Snapperly had no teeth and talked to herself, right?” said Miss Tick.

“Yes. And she had a cat. And a squint,” said Tiffany. And then it all came out in a rush: “And so after he vanished, they went to her cottage and they looked in the oven and they dug up her garden and they threw stones at her old cat until it died and they turned her out of her cottage and piled u pall her old books in the middle of the room and set fire to them and burned the place to the ground and everyone said she was an old witch.”

“They burned the books,” said Miss Tick in a flat voice.

“Because they said they had old writing in them,” said Tiffany. “And pictures of stars.”

“And when you went to look, did they?” said Miss Tick.

Tiffany suddenly felt cold. “How did you know?” she said.

“I’m good at listening. Well, did they?”

Tiffany sighed. “Yes, I went to the cottage next day, and some of the pages, you know, had kind of floated up in the heat? And I found a part of one, and it had all old lettering and gold and blue edging. And I buried her cat.”

“You buried the cat?”

A HAT FULL OF SKY

Title: A Hat Full of Sky 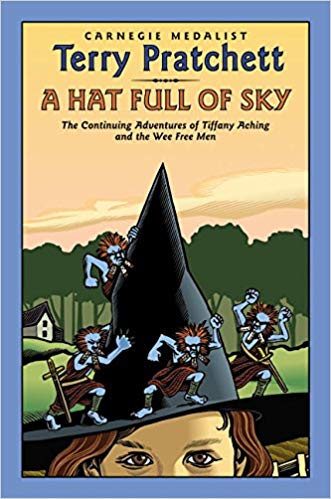 In A Hat Full of Sky Tiffany now 11 goes away from her home on the Chalk to study witchcraft with Miss Level, in the mountains, she learns that real witching is mainly just helping folks. Unfortunately she is pursued by a Hiver, a creature which takes over the minds of the powerful to hide in their bodies, slowly driving them mad. After she is taken over, with a lot of grit, the power of the land, and the help of the Nac Mac Feegal she is able not only to free herself from the Hiver, but to save the monster from its eternal fear.

In this book the theme of community is stressed, while we are reminded, up close and personal how not pleasant that community can be. But that

“someone has to speak up for them as has no voices.”

“You can’t not help people just because they’re stupid or forgetful or unpleasant… If I don’t help them, who will?”

I think the American mindset in particular can get very hung up on people needing to pull themselves up by their bootstraps, and that you are only responsible for you, and individualism and forget that we are each of us part of a community and we have a duty to those in our communities who struggle.

In A Hat Full of Sky you are reminded

“There isn’t a way things should be. There’s just what happens, and what we do.”

In a world that so often doesn’t seem fair or right, there is something so important about this reminder that we can all do something about it, that every little step in the right direction helps.

“Even if it’s not your fault, it’s your responsibility.”

It is also a story of belonging and power and respect. Tiffany is becoming a young witch to be respected instead of a child who has stumbled into a situation with no one else to lean on.

“ Why do you go away? So that you can come back. So that you can see the place you came from with new eyes and extra colors. And the people there see you differently too. Coming back to where you started is not the same as never leaving.”

Right now I have The Wintersmith on hold on my library app, so until part 2 then… be kind, even when you don’t want to. Do what you can because you are there and you can help, even if only in a small way, and never give up hope.

P.S. if any of you lovelies want to get me a shirt or mug with

“Be the witch and know things.”

Printed on it, I think it’s so much better than the GoT version.